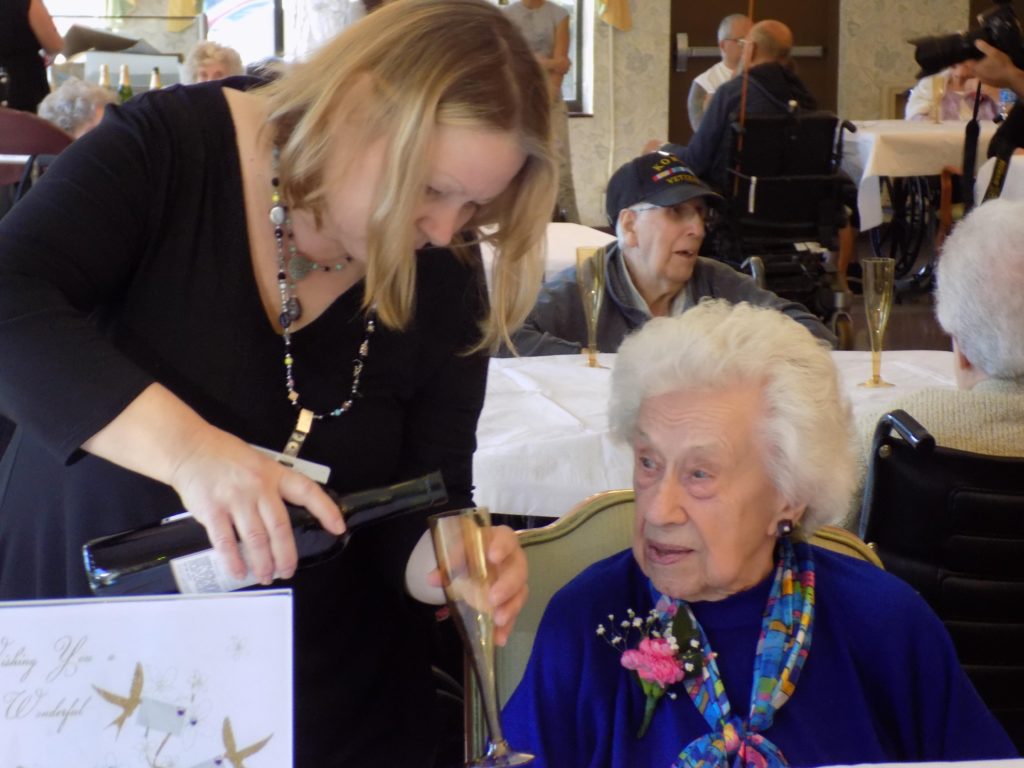 Kenmore, NY -- Six residents currently living at Schofield Residence in Kenmore celebrated a huge milestone on Wednesday, August 24. Members of the community were invited to a Centenarian Celebration, at 2:30 pm, to offer their best wishes to Mary Walters, Esther Skrzypczak, and Katherine Moeller on their 100th birthdays and Leola Mitchell, Edna Davignon, and Nicholas Gazzo on their 101st birthdays. Live entertainment, gold and silver decorations and a cake worthy of celebrating over a century of life highlighted the festivities. Many things happened 100 years ago. America was in the midst of World War I, Einstein developed his theory of relativity, and the cost of a U.S. stamp was around two cents. It was into this world that Schofield's centenarians were born. Each one of them has an incredible story to share, filled with the wisdom of 100 years of experiences. Mary Walters is a native of North Tonawanda. She was married in 1938 and has four wonderful children. Mary has a particular love for tap dancing, which she performed well into her 80s at several area nursing homes. Esther Skrzypczak has had a year full of celebrations, as she also celebrated her 70th wedding anniversary with her husband, Casper, and their two children. As a buyer and department manager for AM&A's, Esther was able to see parts of the world she only dreamed of growing up as one of eight brothers and sisters. Katherine Moeller's life is truly a testament to longevity, born and raised in Buffalo, NY, she was married to the love of her life for 51 years and worked for over 30 years at Woolworth's and Neisner's. Leola Mitchell grew up during the Great Depression, taking jobs as a housekeeper wherever she could, eventually working at Hens & Kelly, and retiring from there years later. "Lee's" story would be incomplete without mentioning the love of her life, James. They were married on Christmas Day, 1936, and went on to enjoy all of life's adventures together. Edna Davignon is the ultimate matriarch of an impressive extended family. After having five children of her own, she is now the grandmother of 21 grandchildren and great-grandmother to 40 great-grandchildren. North Tonawanda has been her home for over 70 years, 64 of which she spent in marital bliss with her husband, Francis. Nicholas Gazzo is a North Buffalo native and made his living at the Chevrolet Delevan Plant and at Chris-Craft Boats on Niagara Street. His wife Beatrice brought him the greatest sense of joy in life as did their many trips to Virginia Beach before her passing. With a group of honorees like this, the whole facility was filled with excitement. August 24 was surely a day that will be long remembered, as Schofield celebrated not one, but six historic birthdays. If you or a loved one needs home health care services, short-term rehabilitation, adult day health care, nursing home care, or a private duty aide at home, Schofield Care has a program that can help. Founded in 1910 and located at 3333 Elmwood Avenue in Kenmore, Schofield is one of the most experienced and respected providers of home and long-term health care services in Western New York. For more information about Schofield's Skilled Nursing Facility, please call (716) 874-1566.